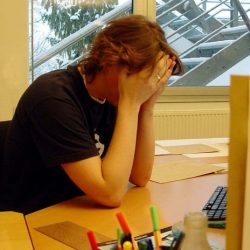 Stress at work kept 51% of workers surveyed in a recent BUPA survey awake at night while 42% of those surveyed said stress at work had ruined their life.

The Australian Government conducted a survey into 8,000 workers and found that self-reported anxiety and depression increased amongst women who routinely worked weeks longer than 38 hours a week over the six-year study period.  For men the threshold was a little higher at 43.5 hours per week which is below the 48 hour week set by the International Labour Organisation.

Canadian research by the University of Montreal has also shown that prolonged exposure to stress at work is associated with an increased likelihood of lung, colon, rectal and stomach cancer.  The associations were observed in men who had been exposed to stress at work for more than 15 years.  The link was not found in participants in the research who had been in stressful jobs for less than 15 years.

We will discuss the rise in stress at work and other common conditions as well as work place strategies to help mitigate these at my forthcoming annual seminar this month.  You can find out more about employment law issues for 21st Century businesses here.